A guide to creating the most beautiful and festive cheese board and appetizer display for the holiday season! Recipes and fun gift exchange game included! 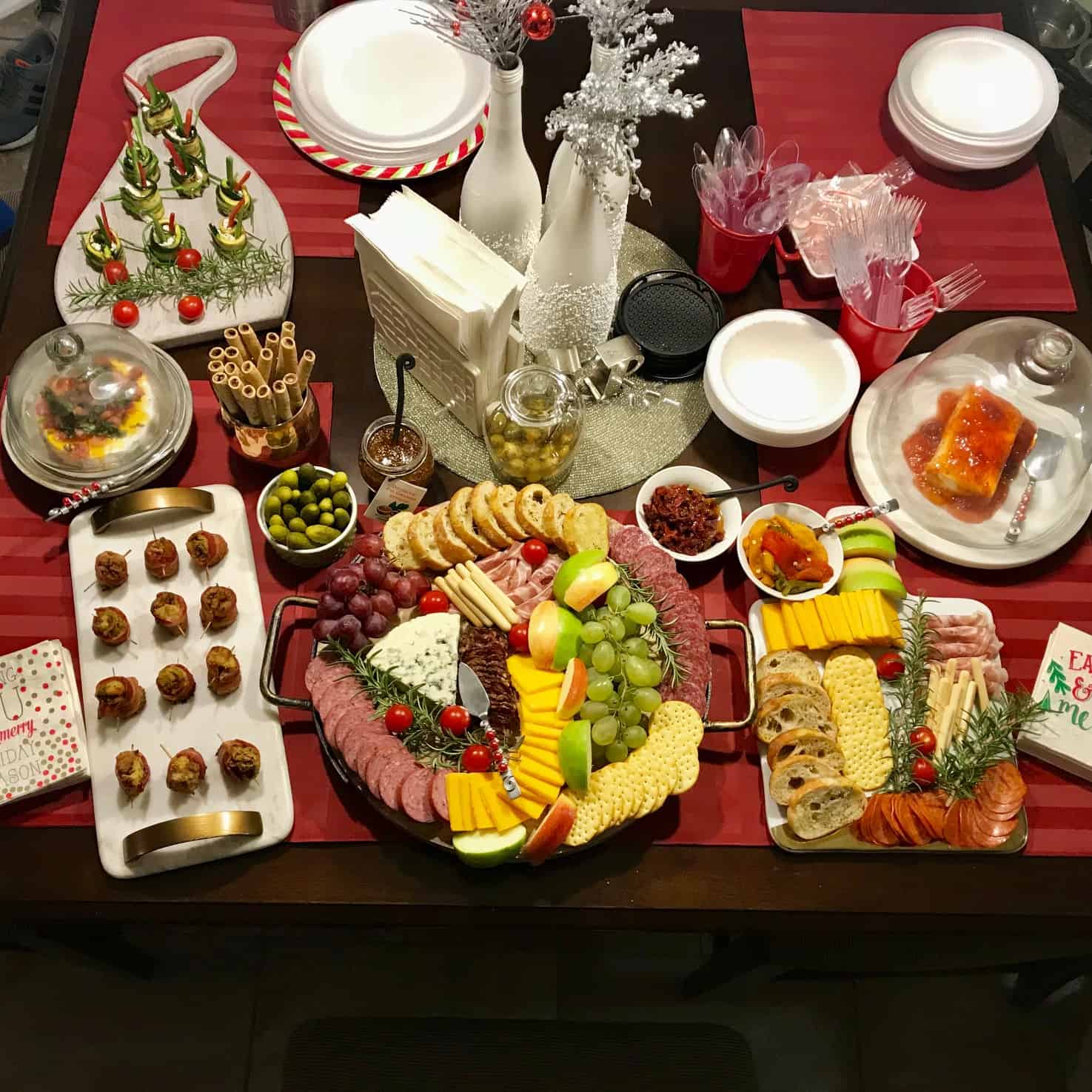 It’s the holiday season!! Which gives me an excuse to make extravagant cheese boards, appetizer spreads, and festive drinks without anyone questioning my sanity and general overboard-ness when it comes to the food portion of entertaining guests. (Let’s face it, I mainly started a blog so I could do too much and excuse it by saying “Oh it’s for the blog….” 😛 ) 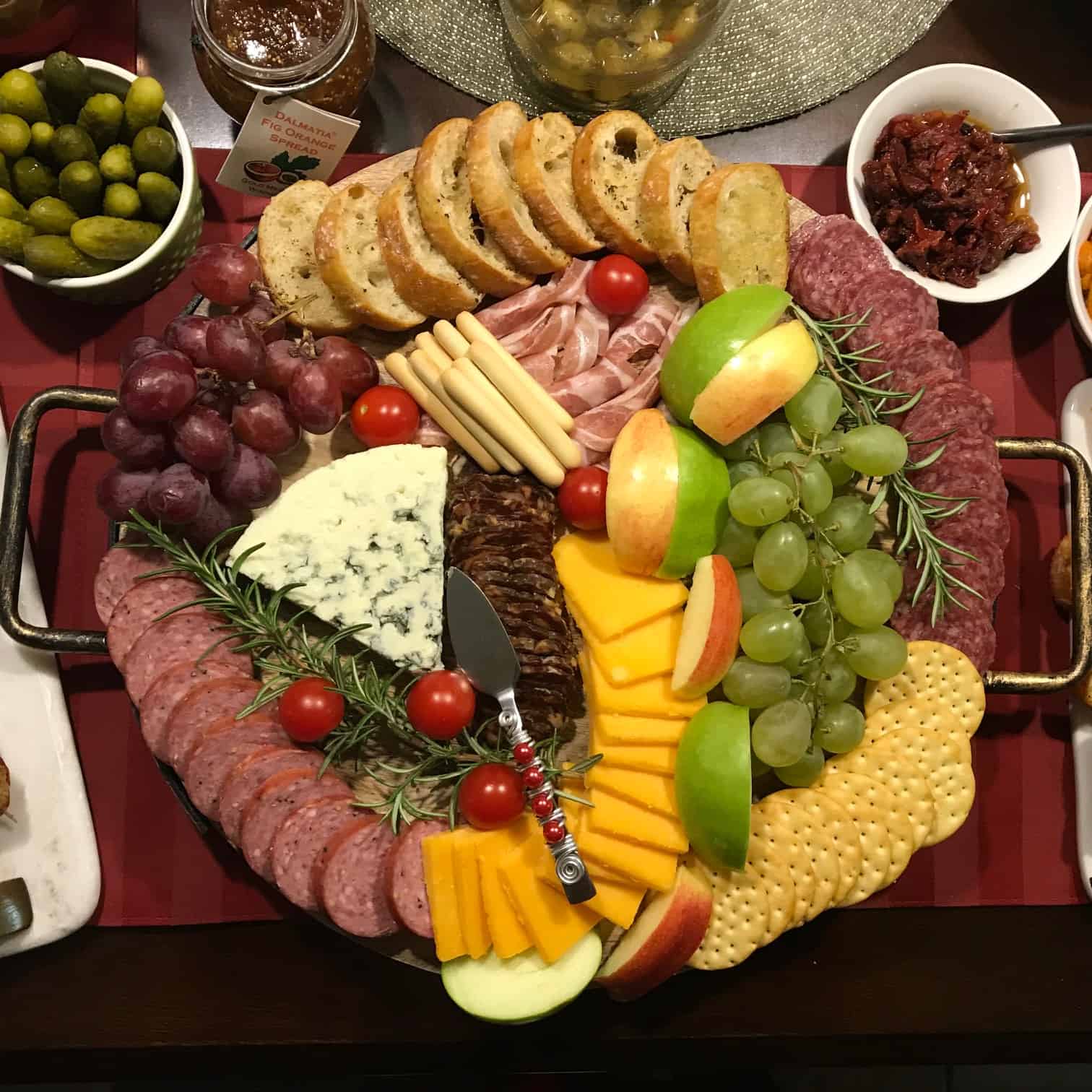 My absolute favorite section of the food pyramid is cheese and charcuterie boards (that’s a section, right? I’m pretty sure it’s from the newly constructed pyramid..) I could live off of appetizers, snacks, small bites, and cheese boards. In fact, I’ve been known to go to a restaurant and just order a charcuterie board as my entrée. Not the healthiest of options, I know, but I’m working on getting myself under control! I just love snacking! And we all know how much I love CHEESE so getting to indulge in various types all on one board is my kryptonite.

Anyway, we recently hosted a Christmas party for a few of our friends and I voted myself responsible for the appetizer segment of the evening and then proceeded to make way too much food. (I have a sickness, I swear.) I was really satisfied with the outcome and wanted to share some of my tips and tricks for a perfect holiday appetizer spread in case you may be finding yourself responsible for the pre-food-food this holiday season! 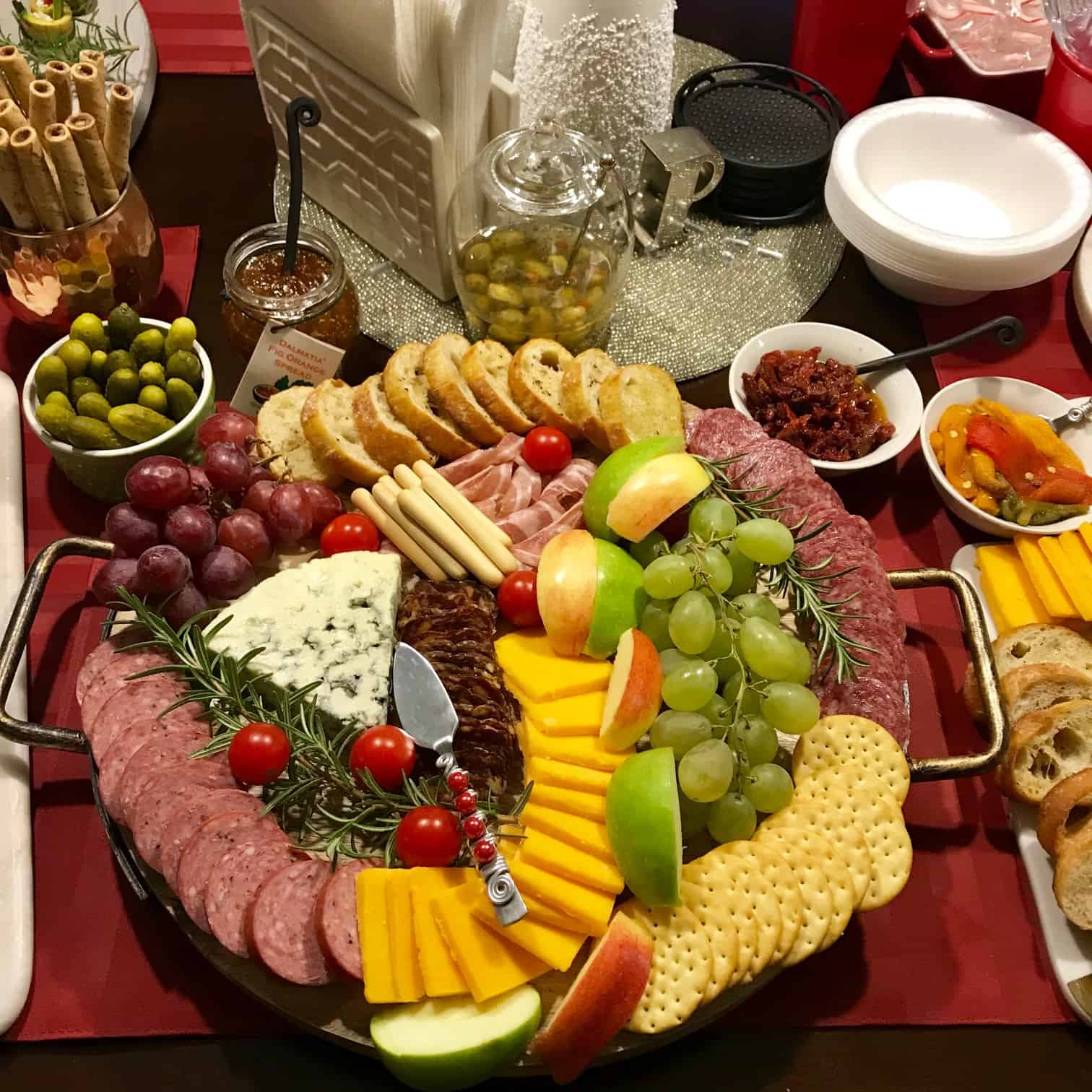 Let’s start with the heart of the spread. The cheese board. This is actually the first one I’ve made this elaborate and it was WAY too much fun. I have this great wooden platter that I love serving appetizers on and it worked perfect for the main board. I started by adding the cheeses:

There’s a million types of cheese you could choose to add to your cheese board, but as a recommendation, it is good to have a soft cheese (such as brie or goat cheese), a semi-firm cheese (such as cheddar or gouda), an aged cheese (such as asiago or parmigiano), and a blue cheese (such as gorgonzola or roquefort). My brie is coming later on in the post and I usually have asiago on my boards but since I already has so much I decided to go with a pepper jelly cream cheese dip instead (later on in this post as well!)

Next, I added in some grapes because I knew they would take up a lot of space. I chose to use both red and green grapes not only for flavor, but also for appearance. Who doesn’t love a slice of cheddar cheese with a red grape, right?!

I then started adding in the meats. Because every good cheese board needs a meat paring! I used 4 different types of meats on the main board:

We were going to need a vessel for all of these delicious meats and cheeses so for my next step I added in some buttercrisp crackers and crostini. To make the crostini just slice a baguette into thin slices, place onto a baking sheet, drizzle with olive oil and pepper (you can use some garlic too, if you wish!), and bake at 375 degrees for about 5 minutes. Flip then bake for another 5 minutes, or until crispy and slightly browned. I also really wanted to add in some of those long, elegant breadsticks, but after 2 grocery stores we still couldn’t find them! Andrew ended up buying me some of those little fake cheese snacks that come with breadsticks and we threw away the fake cheese and used the little breadsticks on the cheese board. It was the best we could find but they worked well! 🙂

Finally, I filled in the holes with some red and green apples slices, and garnished the platter with some fresh rosemary (that I still have in my backyard) as well as some cherry tomatoes.

Around the cheese board I placed bowls of mini kosher pickles, fig and orange spread, sundried tomatoes, and homemade olives and roasted peppers (again from Andrew’s grandfather!) I had originally wanted to place these on the cheese board but there wasn’t enough room. Which lead to me turning my entire kitchen table into one GIANT cheese board….so let’s dig in to what else I included! 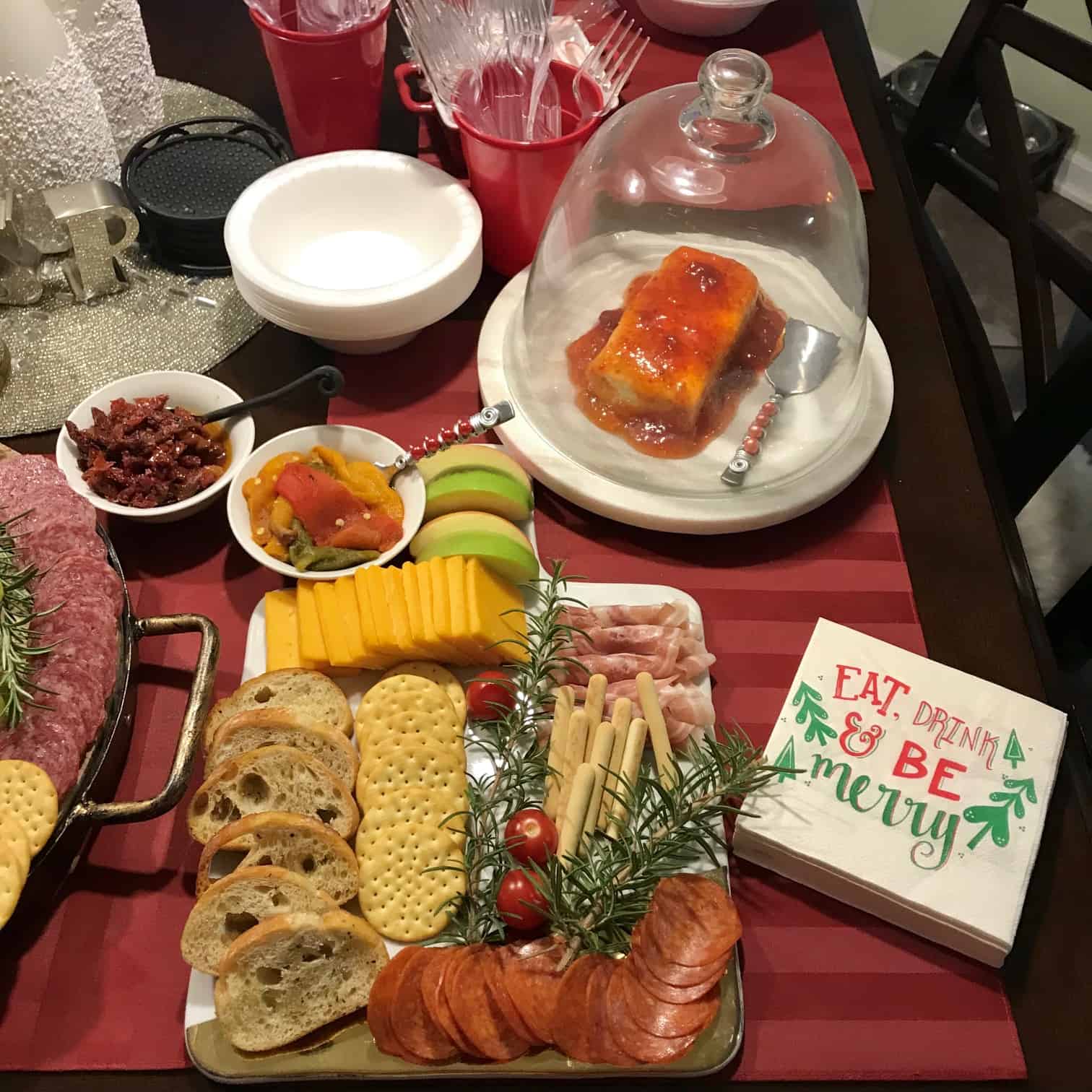 Because my center cheese board was starting to overflow, I decided to pull out another platter. I have this gorgeous marble and gold platter that was perfect for holding some extra meat, cheese and fruit, plus some normal sliced pepperoni.

I then got in the marble mood and pulled out another marble platter I have with a glass dome. It was perfect for my cream cheese dip! My sister had made this recently at her close-the-patio-party and I knew I had to include it in my appetizer spread! Simply put a block of cream cheese on the platter then cover it with red pepper jelly (I actually used a mix of red pepper jelly and raspberry peach champagne jam for some added depth). When my sister made it she used a red raspberry jalapeño jam so you really can get as creative as you want!

Not pictured here is a jar of homemade mustard which we almost forgot about! It paired perfectly with a lot of the cheese board snacks! 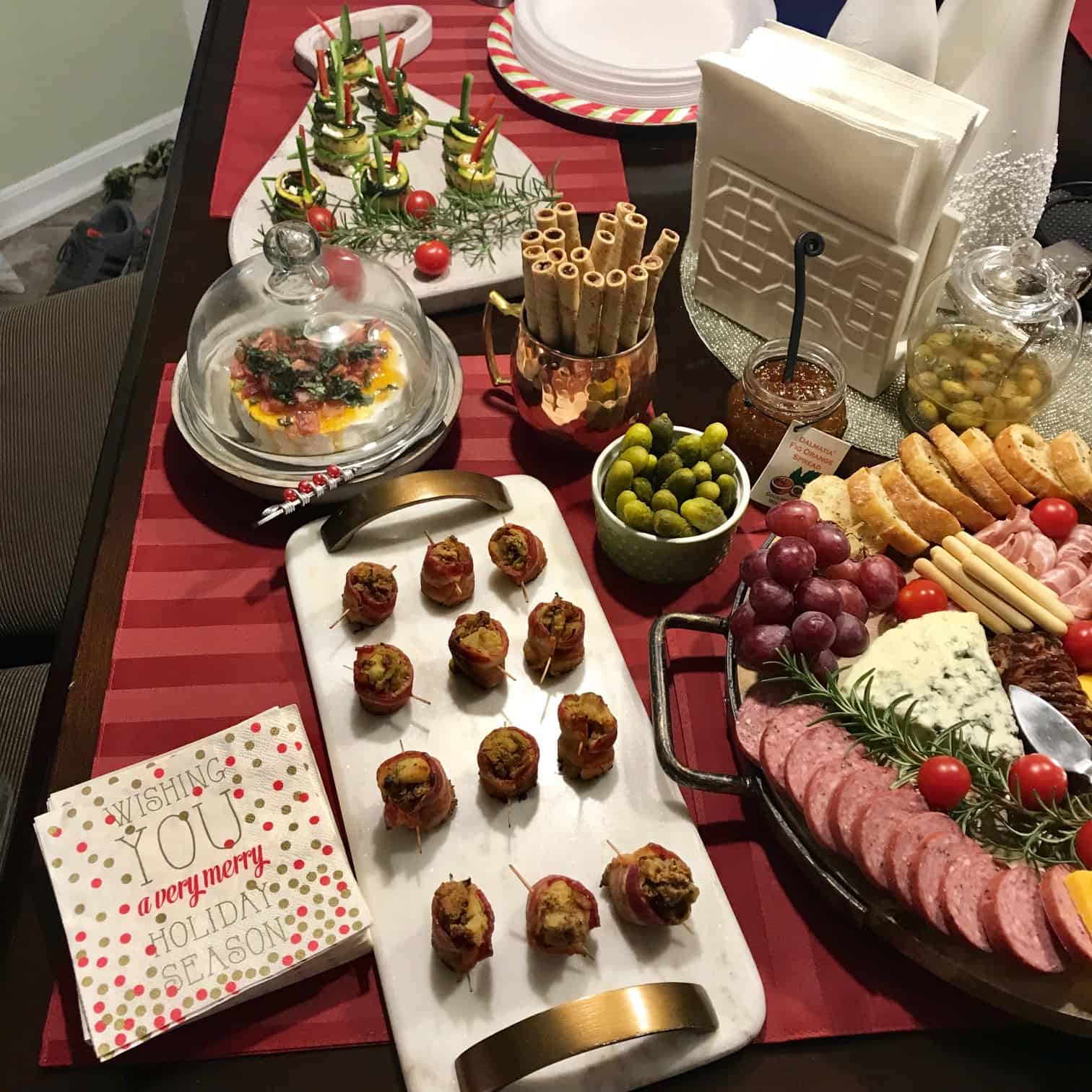 Moving along to the other side of my center cheese board is yet another marble platter (I have a type, I think..) with stuffing bites. I had some leftover stuffing from Thanksgiving I was still trying to use up so I found a recipe to simply wrap them in 1/2 slice of bacon, stick a toothpick through it to hold the bacon on, then bake them on a baking sheet for 20-25 minutes at 375 degrees. It was nice to have a warm appetizer amongst all the cold cheese and fruits!

In the back you’ll see another glass dome wooden platter with apricot bacon basil baked brie. You can just include brie on its own as your soft cheese addition, but I wanted to have another warm appetizer option. Simply place a wheel of brie (rine included) on a baking sheet with parchment paper, top with jam (I used apricot but wanted to use peach. Andrew got to the rest of the peach jelly before me for his whiskey ham glaze!), cooked bacon crumbles, and minced basil. Bake at 350 degrees for 10 minutes and serve with a cheese knife.

In the back you’ll see another wooden platter with goat cheese pepper zucchini wraps which were made by our BBQ Brother, Matthew. He simply cooked the zucchini in olive oil on the stove until softened, spread with goat cheese and rolled around 2 pepper slices (jalapeño and red pepper), then wrapped it all closed with a chive. He’s fancy.

Finally, I placed a moscow mule mug full of hazlenut Pirouettes, because, why not. Not pictured was a bowl of mixed nuts I put out later on! I almost forgot those, too! 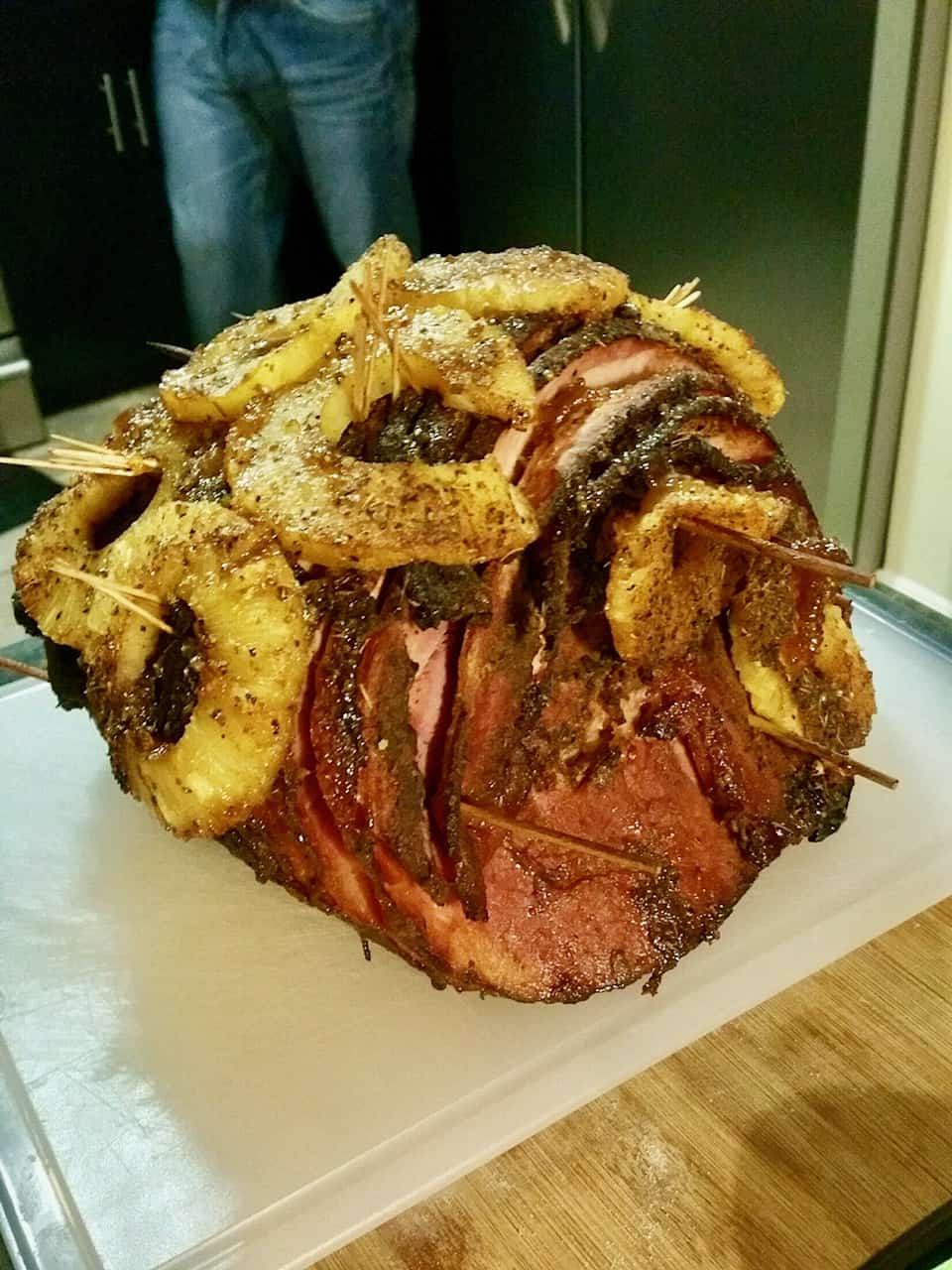 So after eating way too many appetizers, we had dinner which was a whiskey glazed smoked ham with delicious sides from our friends such as garlic mashed potatoes and chive bread pudding! We also had two nutella puffed pastry desserts (one topped with strawberries and raspberries and another in the shape of a Christmas tree!) Hazelnut was definitely our dessert theme for this dinner! 🙂 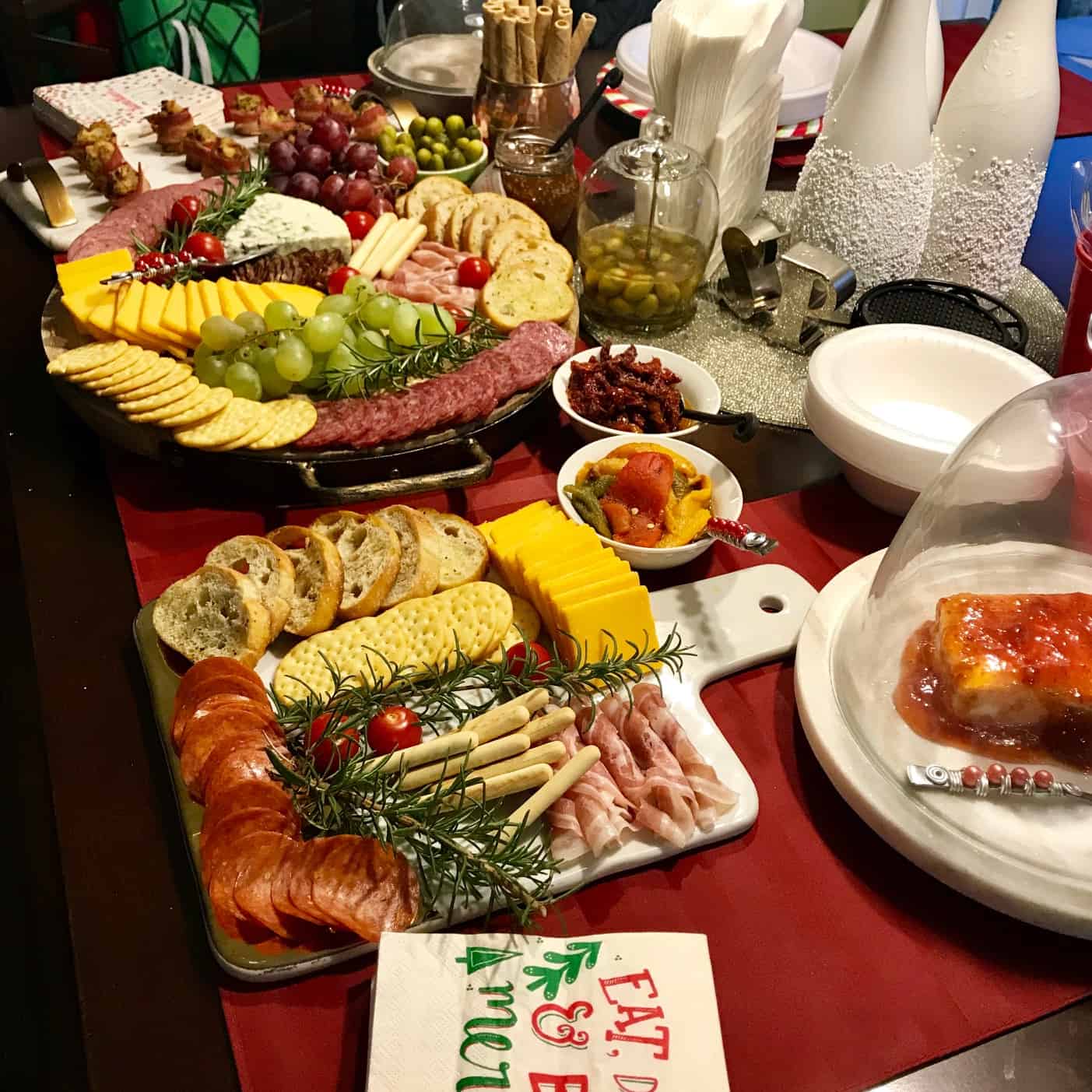 I think I may always volunteer as the appetizer “chef” for our get-togethers! It’s so fun to put together beautiful cheese boards and come up with other appetizers to accompany the boards! Plus, the leftovers aren’t so bad either 🙂 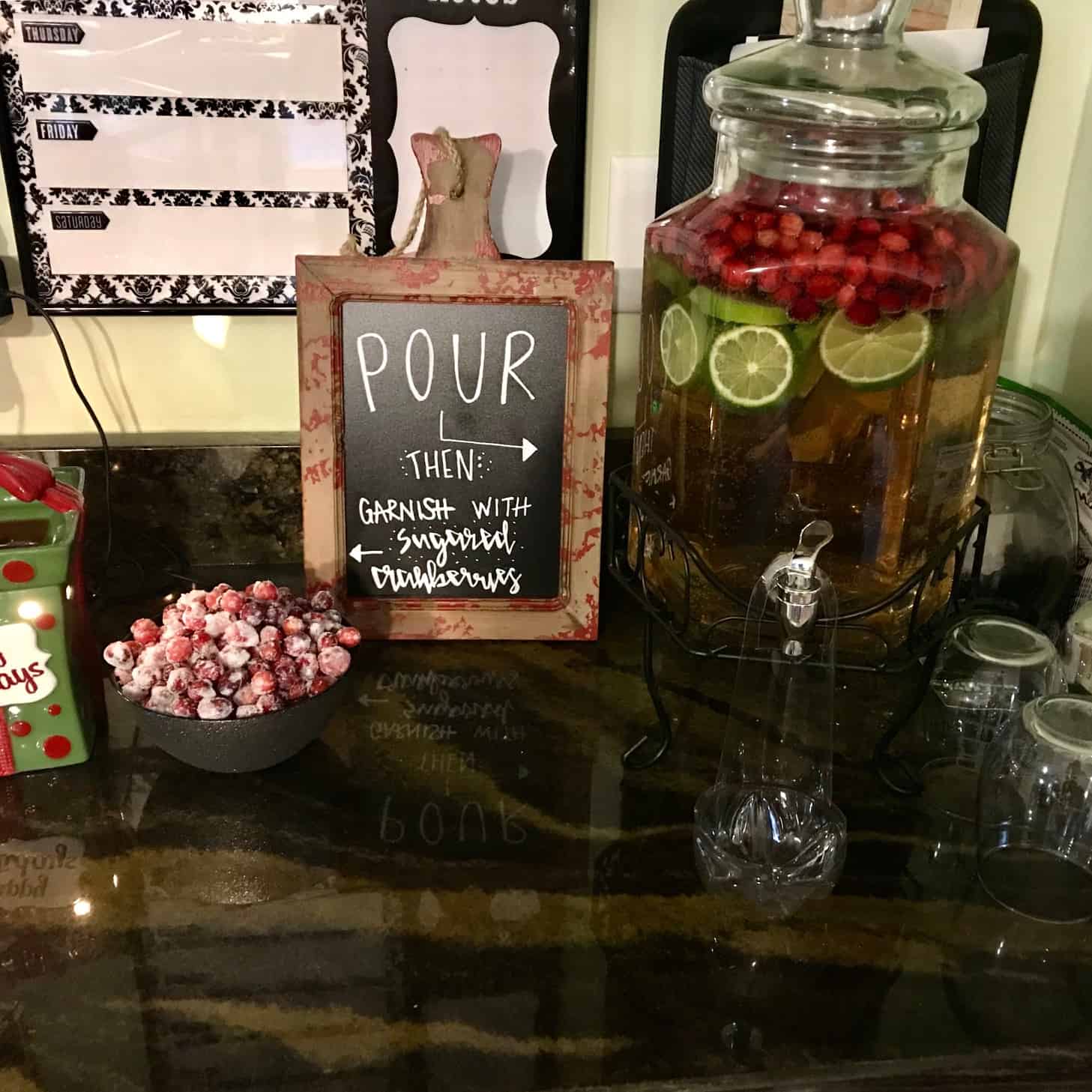 Don’t forget to have a fun and festive holiday drink for your guests to sip while they munch on your appetizer spread! I made a holiday sangria with white cranberry peach juice, a bottle of moscato, vodka, triple sec, and champagne, topped with fresh cranberries and lime slices. Then we garnished our drinks with sugared cranberries 🙂 (Boil 1 C water and 1 C sugar for 10 minutes and cool for 15. Coat 12 oz of cranberries in syrup then place onto a cooling rack over a foil lined baking sheet. Cool for 30-45 minutes then toss in 1 C of sugar.) 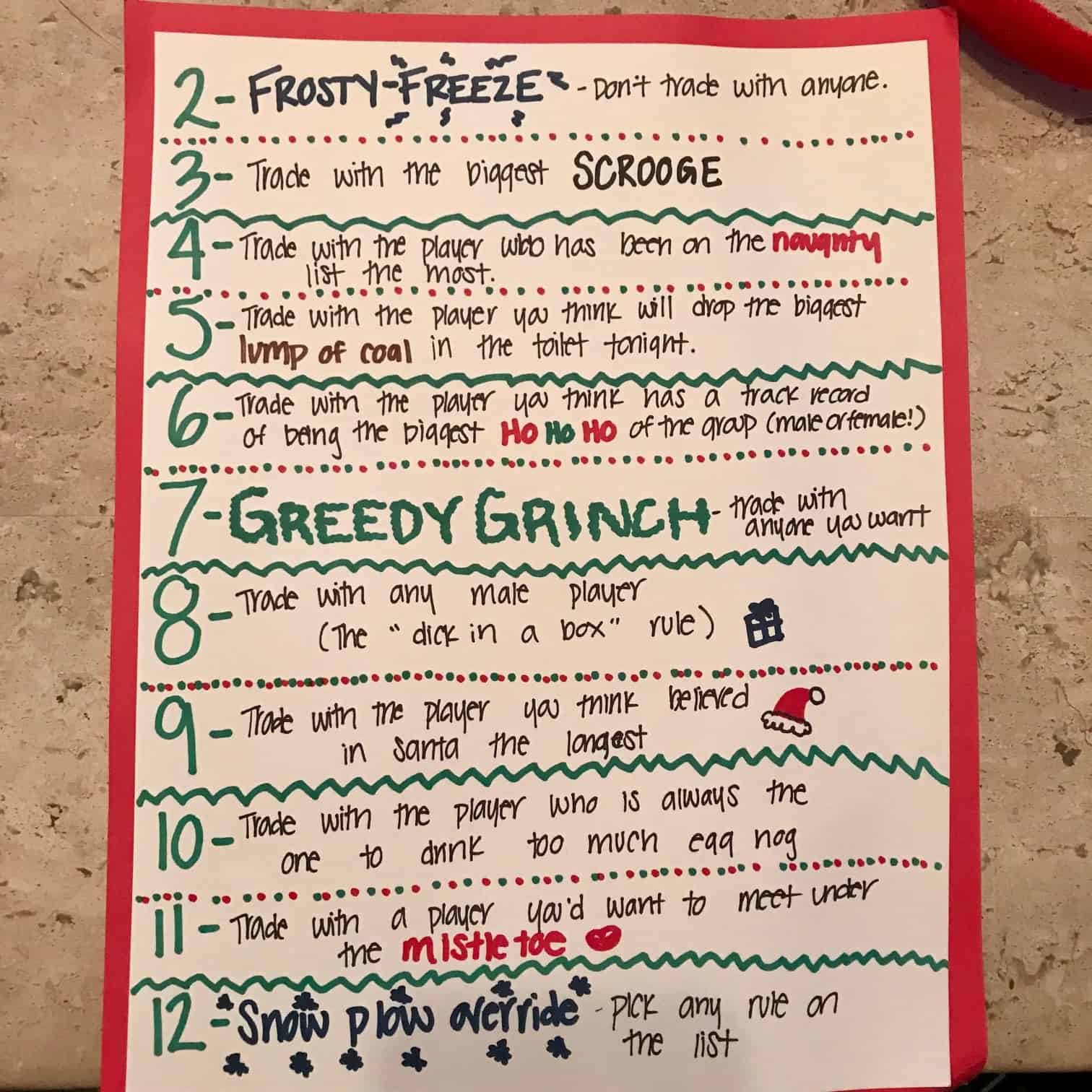 After our stomaches were full we played a white elephant gift exchange that I created 2 years ago. Simply take turns rolling a dice and follow the guide above to exchange gifts. You can go as many rounds as you want! This is the perfect addition to any adult Christmas party and is always so much fun! (I think the most coveted gift this year was a redneck plunger shaped like a shot gun…sound effects included! :D)

I hope everyone is enjoying their holiday season and that this holiday cheese board and appetizer spread guide can make your next gathering a little prettier, tastier, and festive!

Make sure you tag me or share pictures of your gorgeous displays! I have a weird obsession with staring at beautiful cheese boards! 🙂 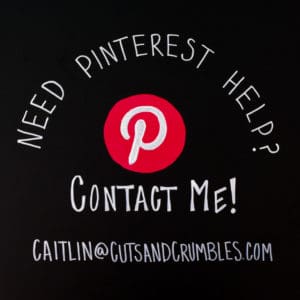 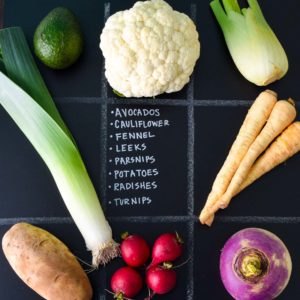 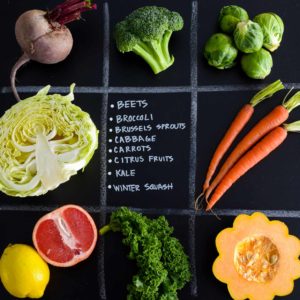 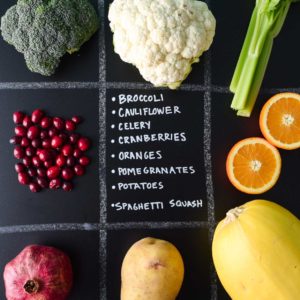 Stay Up To Date–Get recipes straight to your inbox! 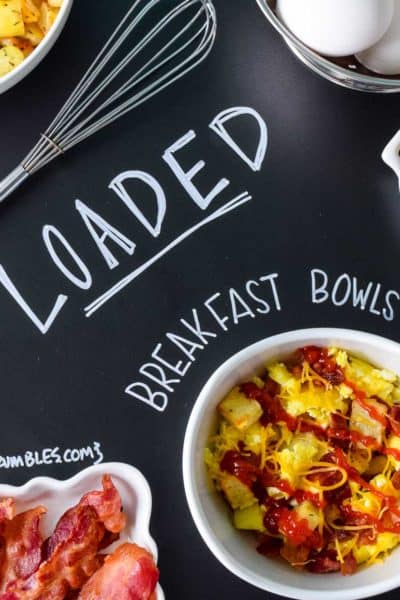 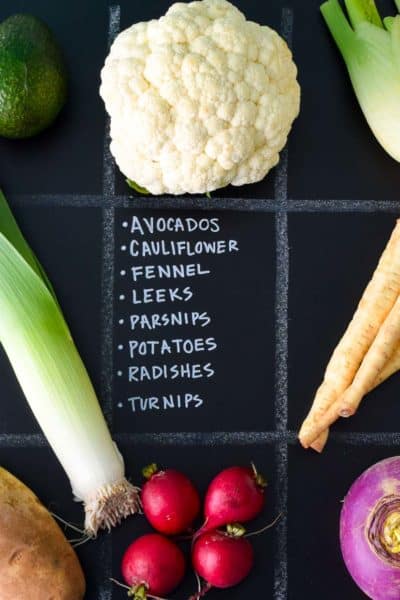 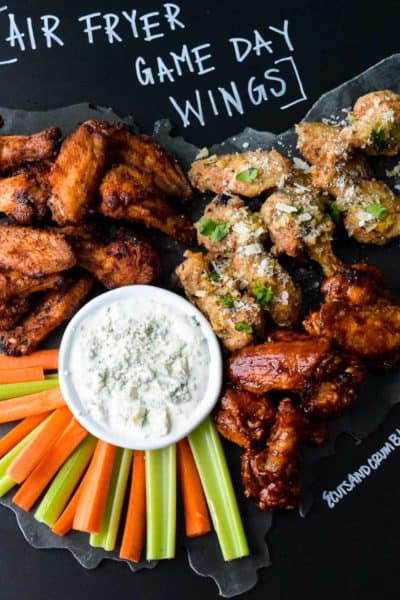 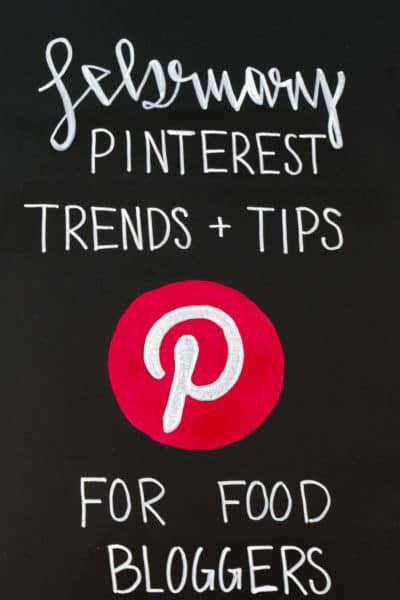