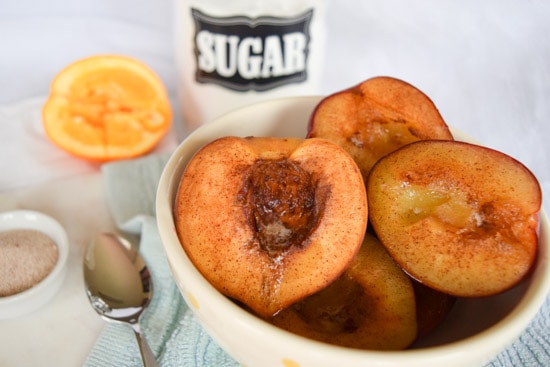 Dessert [dih-zurt] (noun): my favorite meal of the day.

Actually, correction, dessert used to be my favorite meal of the day. I was a sugarholic. As soon as a meal ended I immediately started craving a sugary dessert. Cookies, brownies, chocolate candies, ice cream, you name it, if it was full of sugar I needed it.

Then I met my boyfriend who is absolutely not a fan of sweets. It's unnatural. It freaks me out. It's the only trust issue I have with him, because how can you trust someone who doesn't like sweets?! Just kidding, but seriously he doesn't like them and that's weird to me.

At first it was upsetting I had no one to split dessert with at a restaurant, leaving me with a huge lose-lose moral debate....do I skip dessert entirely, or do I order it and eat the whole thing myself? (oh, hey, calories) Eventually I began skipping it, and now I hardly ever crave it! Whodathunkit?

Although I don't crave the same high calorie desserts that I used to, I do occasionally want some type of dessert. Typically I pop a few grapes and I'm good to go, but some days grapes just don't make the cut.

I was watching the Cooking Channel the other day (per the usual), and saw a recipe for roasted fruit by Kelsey's Essentials. My brain immediately said "YEP. We're makin' that!"

This turned out so much better than I even thought it would. It tastes just like pie. So indulgent, yet so low in calories! When I made this dish my boyfriend said "So this is a crumble recipe, right?" NO SIR, it's a cut all the way at only 85 calories for 2 halves! Whaaaat?

I feel like I've been a really lazy food blogger lately. The balsamic roasted salmon, the brie, bacon, peach and basil flatbread....all so simple and quick to put together! Now this? Do I have something against prep times longer than 5 minutes, or what?

I love to cook! So I don't mind taking my time doing it, but geeze louise there are some super tasty, simple recipes out there! And apparently I've been craving them lately.

For making roasted fruit, you really can use any type that you want. I chose plums and peaches because they were available (and two of my favorites), but you could use pears, nectarines, apricots, or mangos. You can also make as much as you want! I used 3 plums and 3 peaches. 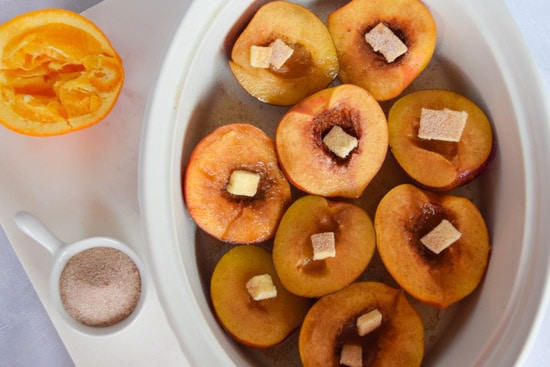 To start, just slice the fruit lengthwise and remove the pits. Add to a bowl with 1 teaspoon vanilla extract and the juice from one orange and mix to coat. In a separate bowl, mix together ⅛ C sugar and ¼ teaspoon cinnamon.

Place the fruit, skin side down, into a greased baking dish and drizzle with any remaining juice. Slice 1 tablespoon of unsalted butter into small squares, enough to place one on each half of fruit. Sprinkle with the cinnamon sugar mixture then bake at 400 degrees for 20-40 minutes (until fruit is tender, which will depend on ripeness).

You could serve this with ice cream but I chose to use a dollop (love that word) of fat free cool whip. Enjoy, it seriously tastes just like pie!  🙂 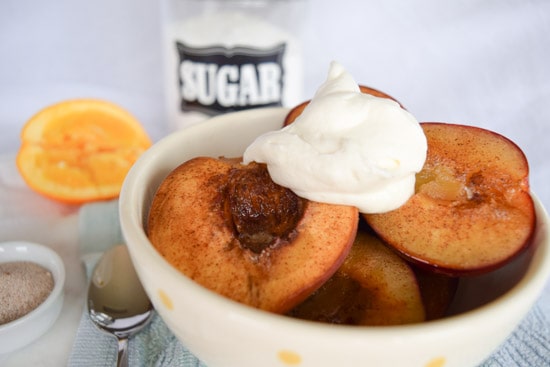 An indulgent dessert that tastes just like pie but has only 85 calories per serving! (2 SP)

2 SP for 2 halves
*Various fruits can be used such as peaches, plums, apricots, nectarines, pears or mangos.

**Recipe adapted from Kelsey's Essentials on the Cooking Channel (love her show!)

Hey I’m Caitlin! I am the chalkboard artist, photographer, writer, and overall boss-lady behind Cuts and Crumbles! I love sharing easy recipes that are possible for any skillset and suitable for any occasion! From recipes with low-calorie ingredient swaps to more indulgent dishes and even off the grill smoked specialities, I've got you covered!